Era: The Consortium Comic – Counting Down From One – Physical Version

A comic about five time travelers who return to their past (still our future!) and attempt to change the history they grew up with.

Why change history? There is a mysterious threat looming in the future that Humanity and allies need to stand together to repel. Events occurred in the early history that caused society in the future to be unable or unwilling to stand and fight… and the people who sent them believe that this can be fixed.

Their mission is simple – assassinate a young man who will become one of the most powerful men in the Consortium, and shape the society more than any other.

The team are a small group, trained from birth to fulfil this mission and then live through history, correcting further events: Brynne Abramo, the team leader. An “ice queen” who seldom shows emotions, but a brilliant strategist… and the one who will assassinate the target in a more traditional manner as a last resort. Simon O’Connor, the team’s muscle for the operation. He’s big and tough, but not so hot on the brainpower! Danny Ackerman, the team’s medic. He always has a smile on his face, usually at Simon’s expense. If he has to die, he’ll find a way of doing it laughing! Gerlof Solomon, the team’s explosives expert. From the planet Nodens, he is a member of a religious order, known as “The People”. He is a pious man who often invokes his deity when he feels the need. Nurten Vieth, the team’s sabotage expert. She’s sarcastic and scathing when she needs to be, but she’s a large part of what holds the team together. When they land naked and disoriented, someone is there for them, a contact who knows about their mission is right there and prepared to assist them. “Arthur” is a bit of a mystery. He refuses to reveal his name, saying it may damage the timeline, but he’s clearly dedicated to the team’s success and he knows more than anyone who wasn’t associated with their mission control could know.

Landing on Taranis, the same planet that they left 700 years later, they need to come to terms with many changes; it is no longer the city-covered world they know. It is a wild, untamed and dangerous place and the first colonists of the Consortium are fighting to build a new civilisation… 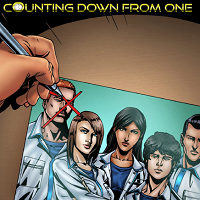 Shades of Vengeance is a UK-based company which creates Tabletop Roleplaying Games and Card Games. We also create comics within these universes!

Or join us on Discord

Signing up to our Newsletter